View cart “Wurly Grinder” has been added to your cart.
In Stock

If you work in a stereo environment, this is the solution you’ve been waiting for!

The acclaimed Lounsberry Pedals Tall & Fat design is now available in a Stereo Pedal. The Lounsberry Tall & Fat has long been the “go to” pedal for organists, guitarists, and bass players. Organists and keyboard players have previously had to use the mono output from their keyboard to be able to use the Tall & Fat pedal. They would typically connect the Tall & Fat output to an external stereo rotating speaker simulator and then on to their stage or recording mixer or amp. The Tall Fat and Wide allow full stereo throughput to a stereo recording or playback system.

The Tall, Fat & Wide can now be used post-simulator in stereo. Tall, Fat & Wide was designed to be used as an “always on” preamp (a sound we call ’60’s clean), but it is widely accepted as the overdrive of choice for many organists. When used post-sim, the “Fat” control (drive) should be set to a lower level to control the amount of chop that the simulator produces.

The second pair of outputs that we call the Stereo A10 circuit is available at the “Ring” of the TRS output jacks eliminate the overdrive and provide clean FET preamp outputs that can be used separately or in conjunction (via a mixer) with the main TFW outputs. This is provided for those who don’t want any Overdrive with their post-sim processing.

Remember that the TRS outputs are not balanced, but provide access to a choice of either set of outputs (or both – they are in phase with each other). This greatly expands the versatility of the Tall & Fat platform, allowing it to find many uses from stereo digital keyboard processing to mixing and mastering.

For stereo digital keyboard use, or mixing and mastering, experiment with your choice of outputs.

GET THE MOST OUT OF TALL FAT & WIDE

There are no reviews yet.

Be the first to review “Tall Fat & Wide” Cancel reply 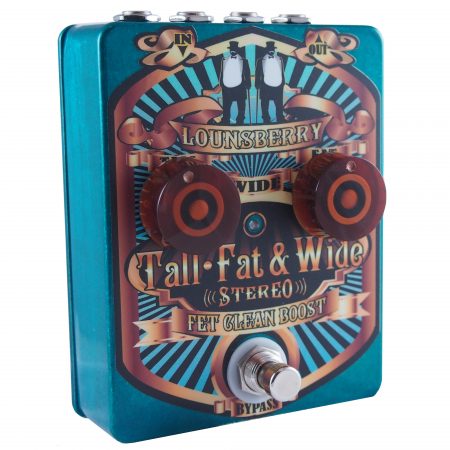